Neville Gafa’ got involved in a fresh spat with Italian journalist Nello Scavo, with the former OPM factotum dismissing the famed author as “crap.”

The latest spat comes after Scavo, who works with the influential Milanese newspaper Avvenire, described Australian blogger Rob Gowans as a spokesperson for the “Libyan Mafia” after the latter tweeted that the Libyan Coast Guard declared all NGOs ad “persona non grata” and accused rescue organisations of carrying out unauthorised searches.

In his reply, Scavo urged the Italian Foreign Ministry to distance itself from Gowans’ tweet, in which it was tagged. Scavo said Gowans, whose Twitter display name is Migrant Rescue Watch, was delivering the “serious, crimi dal, and illegal” threats on behalf of the so-called Libyan coastguard.

This is when Gafa’ got involved by advising Gowans to “ignore the crap. He (Scavo) doesn’t even know where Libya is.”

This is not the first spat between Gafa’ and Scavo, with the former OPM official being acquitted in a court case in which he was charged with threatening the Italian journalist.

Gafa’ was accused of threatening Scavo when he warned him to “Stop your dirty business. If not we will be stopping you” on Twitter.

However, Gafa’ – who has in the past unashamedly admitted that he coordinated pushbacks to Libya – was acquitted after Magistrate Charmaine Galea said she was unconvinced by the claim made by the Italian journalist, who has been under police protection since October 2019.

‘I haven’t even begun:’ Neville Gafà stands by pushbacks

Moreover, the Council of Europe (CoE) published a report in which it said that Libya is not a place of safety for disembarkation, owing to the serious human rights violations committed against refugees and migrants, and the ongoing conflict in the country.

Libya is not considered to be a safe port by the United Nations, though this has not stopped Malta and other European countries from coordinating pushbacks with Libyan authorities.

Earlier this year, UNHCR, the UN Refugee Agency, and the International Organization for Migration (IOM) warned that more migrants and refugees will attempt the dangerous crossings as weather and sea conditions improve and living conditions in Libya deteriorate.

“In Libya, migrants and refugees continue to be subjected to arbitrary detention, ill-treatment, exploitation and violence, conditions that push them to take risky journeys especially sea crossings that may end up with fatal consequences. Legal pathways to safety, though, are limited and often fraught with challenges,” the UN agencies said.

‘Malta does not want migrants’, damning UN report sheds light on the treatment of asylum seekers 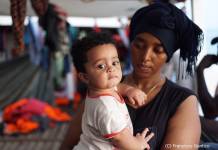