The Għajn Tuffieħa Roman baths have been backfilled with layers of protective materials to conserve them for future generations, in the first-ever intervention of its kind by Heritage Malta.

Structures on site provide shelter from sun and rain, however, they do not offer protection against heat, wind and water seeping beneath.

Besides erosion caused by the elements, damage has also been caused by small animals foraging in the area, plant roots, and people’s footsteps in spite of the fact that the site is not open to the public except occasionally.

Backfilling the mosaic floor in the Apodyterium or changing room. Photo: Heritage Malta

It was therefore decided to preserve the site in its current state to slow down the deterioration process and ensure stability.

This could only be achieved by backfilling it temporarily to provide a similar environment to that where it lay for some 2,000 years prior to its discovery, so as to avoid further loss of material.

Plans for the conservation of the Roman Baths had been drafted for quite some time. In fact, two years ago, as a precautionary measure, a trial was conducted by backfilling a small area on site, devoid of Roman mosaic, with the same materials used in the latter intervention. 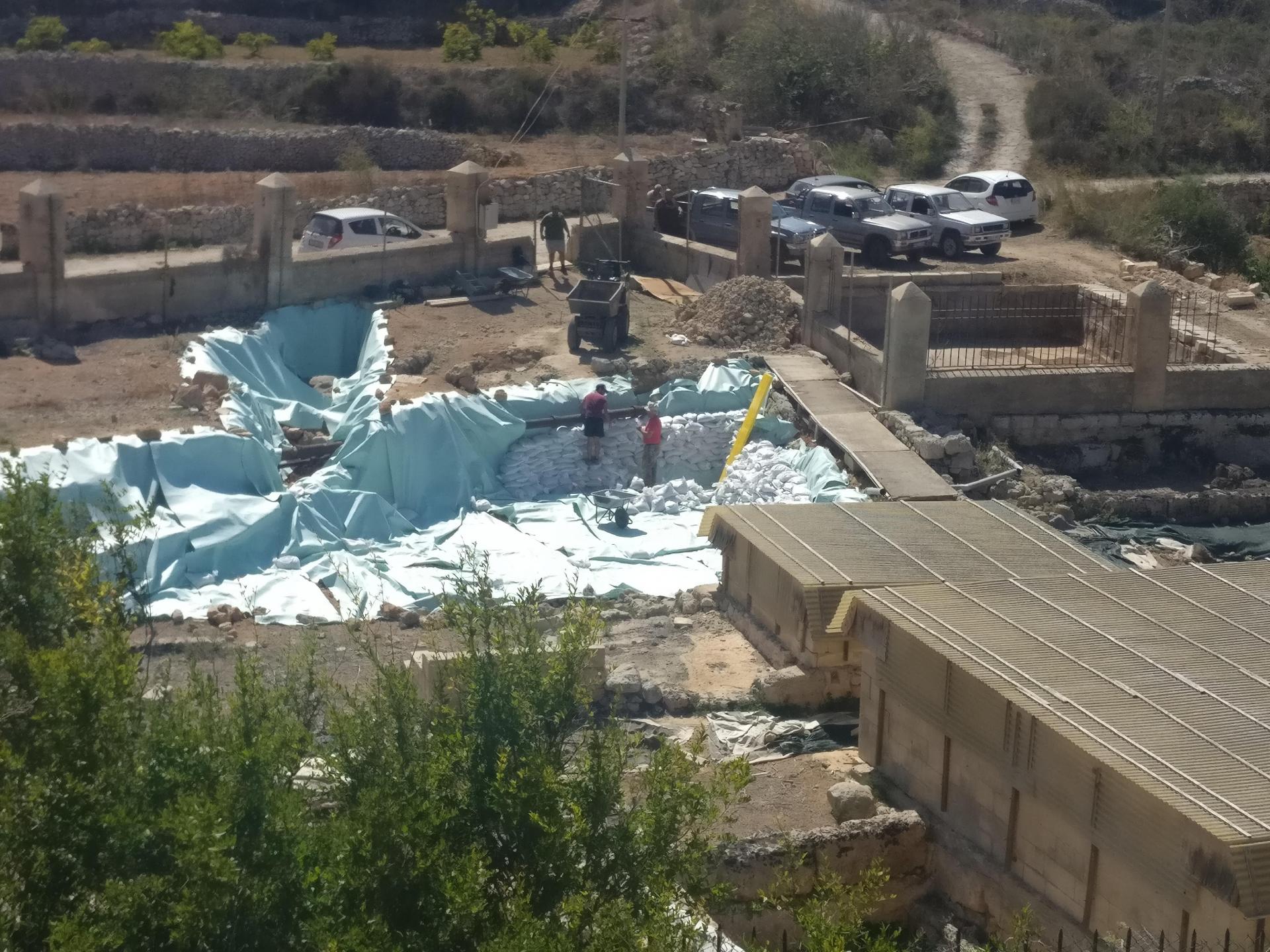 Following a detailed analysis of the site, emergency conservation works were carried out by Heritage Malta’s conservator-restorers in the month prior to this intervention. These included consolidation works, plastering of cracks and plant removal.

Detached mosaic pieces were put back in place not to be lost and to recreate the pattern. Every step was documented, including 3D modelling by Heritage Malta’s archaeologists.

The stratigraphy employed in the site’s backfilling is recognisable and reversible, enabling future archaeologists and conservator-restorers to distinguish the materials from the original site.

Both local and imported materials were used. These were separated from the original surface and from each other through the use of geotextile.

The Għajn Tuffieħa Roman baths were discovered by accident in 1929, when workers were digging a trench to supply nearby fields with fresh water from a natural spring in the area.

They informed Sir Temi Zammit, the Museums Director at the time, who excavated the site in 1929 and 1930 and who believed that the bathing complex dates back to the first or second century after Christ.

The complex, whose location was probably chosen to fully exploit the natural source of water in the vicinity, consists of pools and chambers. One of the chambers was kept warm and is, in fact, elevated, resting on a number of arches where fire would heat up the water.

Heritage Malta’s chief executive officer Noel Zammit said this is a clear and practical example of how the national agency for cultural heritage gives a future to the nation’s past.

“The current situation was not allowing the site to be preserved properly, leading us to decide to deprive ourselves of it to enable future generations to enjoy it instead.

“We cannot retrieve what has been lost from the site with the passage of time, but we can prevent further losses.”

He stressed that the backfilling is only a temporary measure and that Heritage Malta will not disregard this site but will continue to take care of its upkeep until the time comes for it to be uncovered again without any risk to its preservation.

Gozo’s smallest village marks its centenary as a parish – timesofmalta.com