EU Bishops to discuss the contribution of the Catholic Church to the Conference on the Future of Europe – Archdiocese of Malta – church.mt

Delegates of the Bishops’ Conferences of the European Union will participate in the COMECE Autumn Assembly to be held in a hybrid format on 27-28 October 2021, with the participation of Colin Scicluna, Head of cabinet of the Vice President of the European Commission in charge of Democracy and Demography, and Herman Van Rompuy, President emeritus of the European Council. The event will focus on the Conference on the Future of Europe and will include an exchange with young people.

In the context of various COMECE initiatives supporting young people’s voice in the recently-launched Conference on the Future of Europe, the Bishops of the European Union will gather in Brussels to discuss the contribution of the Catholic Church in addressing Europe’s challenges and priority.

The
Assembly will also be an occasion to assess creative ways to better promote
people-centered EU policies, as well as dialogue and solidarity in a
socio-economic and international context that resulted impoverished by the
COVID-19 pandemic.

The programme of the Assembly also includes a Mass for Europe. The Mass will be celebrated in memory of H.E. Mgr. Alain Paul Lebeaupin, former Apostolic Nuncio to the European Union, and will take place in the Church of Notre-Dame de la Victoire, Place du Grand Sablon, Brussels, on Wednesday 27 October 2021 at 19:00 (CET). The Mass is open to the public. It will be presided by H. Em. Cardinal Jean-Claude Hollerich SJ, Archbishop of Luxembourg and President of COMECE, and co-celebrated by the Bishop Delegates of the Episcopates of the 27 EU Member States. 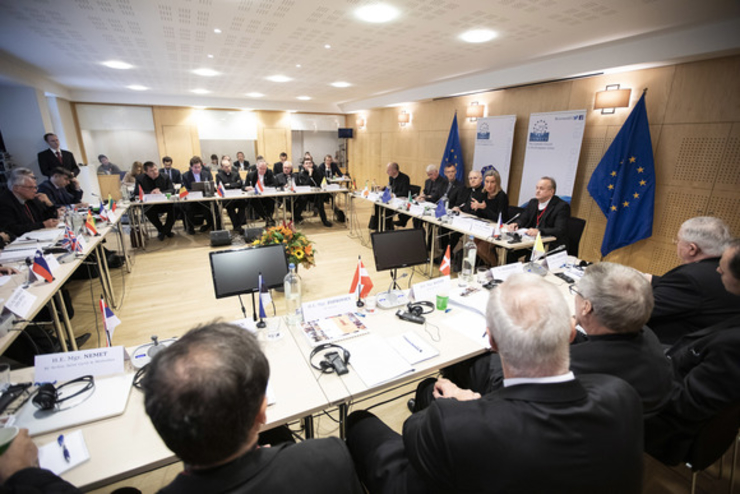