Controversial Balluta stairs design sent back to the drawing board – timesofmalta.com


Updated at 2.39pm with further comments.

A controversial redesign of the Balluta stairs has been sent back to the drawing board following concerns of overspending.

The St Julian’s local council met on Thursday night and agreed to issue a fresh tender for the works after receiving a barrage of public criticism.

The €450,000 embellishment project had sought to replace the current steps with non-slip material and included the installation of wooden benches, a water feature and lighting.

Mayor Albert Buttigieg told Times of Malta on Friday that all councillors had agreed to issue a new call with fresh designs.

“All councillors agreed for this proposal,” he said. 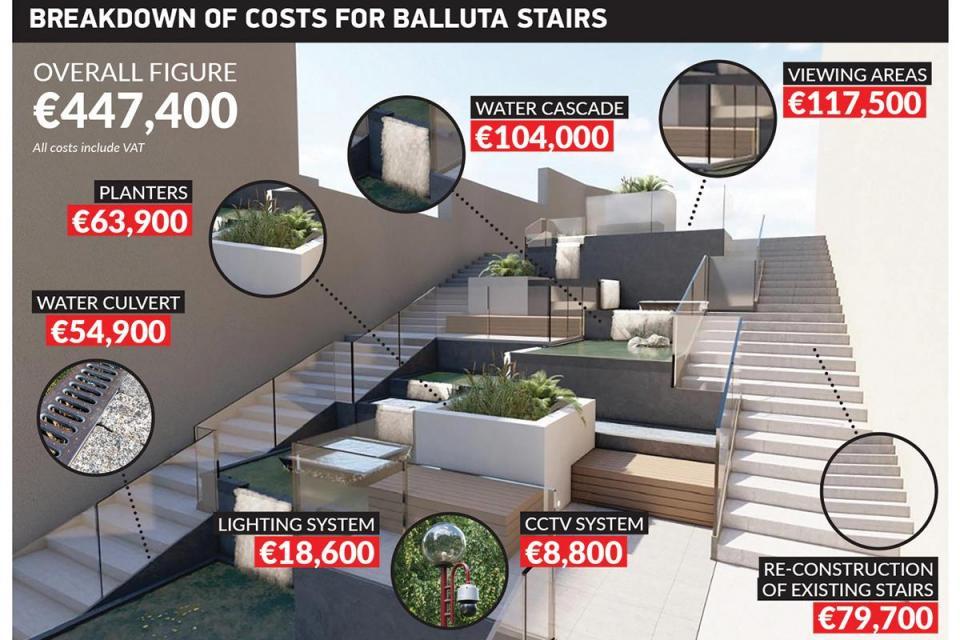 The scrapped design which had come under fire.

Among the main changes is the removal of a pricey water cascade that was set to cost €104,000. This will be replaced by far cheaper indigenous trees.

The installation of glass railings, estimated at a total of €117,500, has also been scrapped and replaced with wrought iron railings.

Buttigieg said a water culvert would be placed at the top of the stairs collecting rainwater.

To add some local flavour, some of the steps will be laid with traditional Maltese tiles.

A poem graffitied onto the stairs will be inscribed onto one of the planters. The new design will also include a stair lift, to ensure public accessibility.

A lack of accessibility was one of the key criticisms the project had received.

“We will find a way to add it to the amended design,” Buttigieg said.

Asked if the overall costs would remain the same, Buttigieg said it was still unclear.

“It depends on the new tender, but the fact that we are removing the water cascade and the glass railings, which are very expensive, we suspect the overall cost will be less.”

Buttigieg said that the seating area will not be removed and the council is working on including a by-law blocking people from sitting on the stairs.

“Just as there is a by-law for people to not sit on the Spanish Steps in Rome, we are working on a similar concept.”

Asked if he believes the new design will be preferred over the older one, Buttigieg said it was ‘impossible’ to please everyone.

“If people were true to their criticism, I believe they will be happy with the new amendments. Of course, you come across residents who wish to leave the stairs in the current state they are in, but as a council we will not have that.”

Buttigieg said all councillors are pleased with the new amendments too.

Addressing the criticism the project received, Buttigieg said that some comments were unnecessary.

“It was very hurtful reading some of the comments, those that attacked the council, especially taking into consideration that the plans took over six years to finalise, and at first no one raised any concerns,” he said.

“We are here for the public, for the residents. We spent until 9pm last night amending the project, taking on all the criticism and feedback we received, but some councillors are worried that people will still not be happy.”

The next step includes the architect submitting the amended designs to the planning authority, a process that could take five months.

“We are at risk of losing funds, but I am following what the people wanted and fingers crossed that we do not come to that situation.”